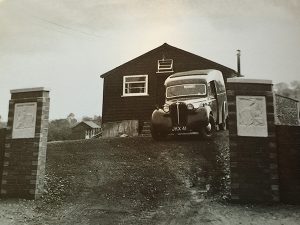 When looking for a suitable site for the hall, the current location was ruled out due to sloping lay of the land. The cost of purchasing the land, levelling it as well as building the hall were deemed too expensive. When no other location was found within the village, John Hopkins, purchased the land from Frank Adams and the land was prepared to receive the hall. 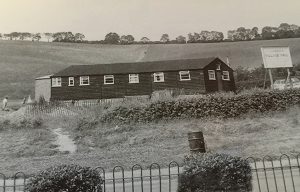 Two Years later, Mrs Miriam Hopkins convinced her son John Hopkins, to donate the land and building to the village. The transfer of the land to the residents was completed on the 25th October 1948. The Hopkins Estate still hold the covenant on the land and its use in order that the land and hall is used to promote recreational activities and support community and village life. 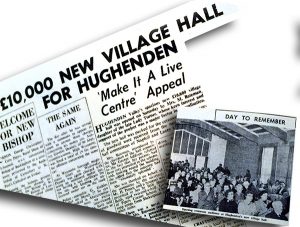 In 1950, a national initiative to ring fence green areas for recreation in Memory of the late King George V was instigated and the village community separated the land on which the hall is situated into two charities and the open field area was registered as a Field in Trust. To this day, the fields are known as the King George V field and the carved stone crests still adorn the entrance posts to the hall and field car park. The original conveyance document can be seen here. 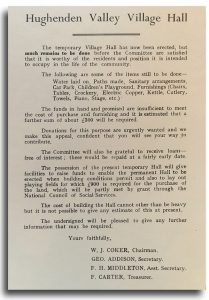 A permanent brick built hall was erected to replace the wooden structure and was opened on the 2nd May 1964. Due to the popularity of the hall and its surroundings, the small hall was erected in 1974 to accommodate the need for more community space. To this date both halls are in constant use and are used by many of the same village committees and teams thatoccupied the original hall, such as the scouts and allotment committee (now HAGA) 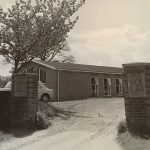 In 1984 a separate building was built near the field and was leased to the then Hughenden Boys football team on a peppercorn rent. The building provided changing rooms and showers for home and away teams as well as a separate changing area for the referee. The building is still in use today. A porch with disabled access and toilets were added to the main hall in 1994. More recently the village shop opened in May 2009 which is a not for profit, volunteer run convenience store following the closure of the local village store. The latest addition has been the coffee shop which opened I December 2014 and is a very popular meeting place. 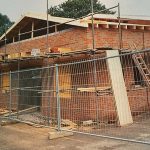 The village hall and other community facilities located on the land continues to serve as the centre of village life for Hughenden Valley and the committee strive to ensure that the land and its buildings are developed and maintained to support the ever changing needs of village life whilst remaining true to the original Covenant under which the land was donated.